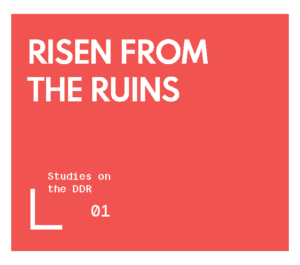 RISEN FROM THE RUINS LAUNCH EVENT

Toge­ther with the Marx Memo­rial Library in London and our part­ner Tricon­ti­nen­tal: Insti­tute for Social Rese­arch, we invite you to an evening of discus­sion on the first edition of the “Studies on the DDR” series.